Pollen allergy? Not from thistles 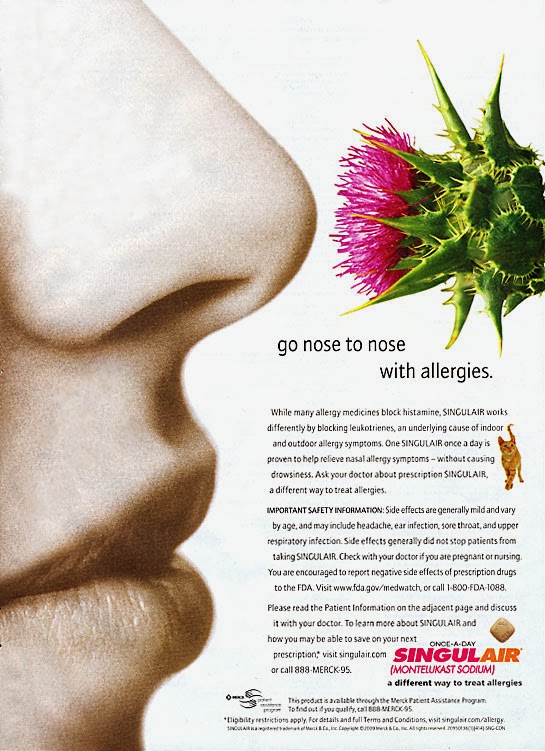 This ad is marketing the allergy medicine Singulair (Merck) and it is titled 'go nose to nose with allergies'.  And right next to the nose is a very spiny, evil-looking thistle head with an abundance of red, small tubular flowers ready to release their pollen.

The problem is that people are mostly allergic to wind-pollinated plants that release dust clouds of dry pollen grains that fly through the air freely and land in our noses, eyes, and mouths.  The non-wind pollinated plants, such as thistles, get visited by insects that carry the pollen from flower to flower.  For the pollen to be a carried by insects, the pollen needs to be sticky so it stays on the animal.  And sticky pollen doesn't fly through the air freely and enters your nose as dust.  So, thistles are not common allergy plants at all.

The most common allergy-inducing plants are wind-pollinated grasses, some weeds (which is a group of a variety of unrelated species), and trees in the plant families containing oaks, birches, and other wind-pollinated trees.  But too often the insect-flowering plants that flower at the same time as the wind-pollinated allergens get the blame, as in this case.

I also think the Singulair marketers rather have a spiny evil-looking weed like the thistle in the ad, than a fragile grass with rather small, obscure flowers. But the use of the thistle spreads misinformation. People might start to pull up goldenrods, thistles, and clover because they think they cause pollen allergies, which is not true at all. If I was working at Merck, the producer of Singulair, I would be very embarrassed over this mistake.
Posted by Botanical Accuracy at 9:54 PM