In this earlier post I explained the background of the Flora Danica series produced by Royal Copenhagen.  Here is another new design from 2012, listed as 'Stedmoderblomst' in the Danish catalog, and as 'Pansy' in the English version of the catalog. 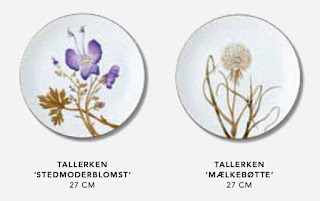 Stedmoderblomst is one of several species of violets (genus Viola, family Violaceae) that are common in Denmark, and the most common species of these are Viola arvensis and Viola tricolor.  None of the violets look the species depicted on this pattern, however. 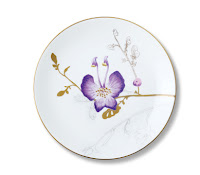 
A detailed look at the plant depicted on this china shows that it is likely a monkshood (Aconitum, family Ranunculaceae). A search through the illustrations of Flora Danica provided by the Royal Library in Copenhagen yields this plate, Aconitum napellus, plate number 1698.


So, from a dainty little violet, to one of the most toxic plants in Europe.

The Aconitum illustration shows a stem with flowers and also a flower that is removed from the stem, and then pressed open and flattened.   Now, compare this illustration to the pattern painted onto the Royal Copenhagen plates and cups. 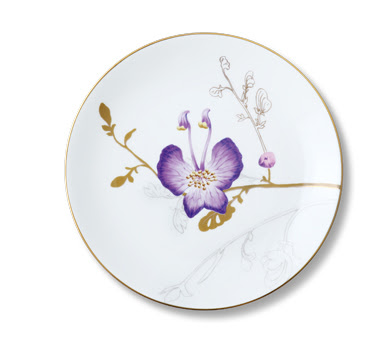 Not only is the species wrong, but the parts of the plant has been removed and then reassembled.  An opened, slightly destroyed flower has been reattached to a partial stem with flowers, The plant morphology has completely changed, and a new plant mutant has been created.  Of course this is perfectly fine in the creation of art, but not if you say that all the imagery is from historic Flora Danica and depict the plants of Denmark.
Posted by Botanical Accuracy at 5:22 PM